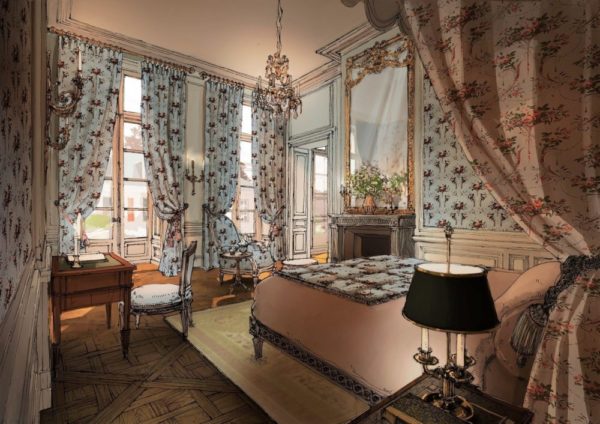 The preeminent design hotel of 2020 is difficult to describe in just one word or phrase. Our newest annual list is curated with something for everyone. Architect Lord Norman Foster (who designed the Four Seasons Hotel Philadelphia at Comcast Center that made our 2019 list) describes the hotels of the future as places that are all about lifestyles—inviting the community to become a part of the property.

“Previously, hotels were more static, fortress-like, and off-putting,” Lord Foster tells AD, adding that unique vantage points are what make hotels exciting these days. “You need architecture that is calming, not shouting at you.” Stacy Fischer-Rosenthal, president of Fischer Travel Enterprises, whose clients always look for something special, says that affluent travelers are seeking hotels and destinations with purpose and meaning, where lifelong memories can be created. “Luxury is the absence of worry, knowing you are in good hands,” she tells AD.

Herewith, our favorite properties opening in or around 2020, with exceptional design, sense of place, and style.

Many people have dreamed of staying at the Palace of Versailles; soon, you can. Airelles, the luxury brand of LOV Group, debuts a 14-room hotel in the spring of 2020—every bit as palatial as you can imagine. Spread across two buildings and three floors, the hotel is set within the perimeter of the palace grounds and designed in the 18th-century style. “It’s a historic building; our design inspiration came from it being the home of Marie Antoinette,” notes architect and designer Christophe Tollemer, who renovated a portion of the palace that dates back to 1788. With period furniture sourced from antique vendors, each of the suites is distinct. “We respected the layout of rooms across the floors,” he says, noting that during Louis XIV’s time, the first-floor rooms were reserved for aristocracy because of their proximity to the king. The basement will have a world-class spa, and all the mirrored rooms have cotton upholstery designed by Pierre Frey that was inspired by 18th-century wallpaper patterns. airelles.com 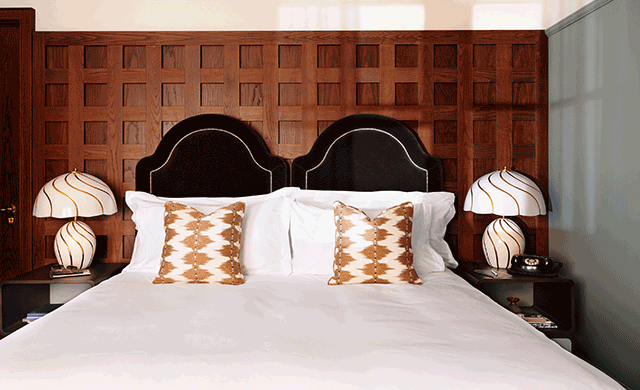 The Hoxton will unveil its 10th international outpost in Rome’s lush Salario neighborhood in fall 2020. Ennismore Design Studio will partner on the interiors with Fettle Design to transform an existing volume into a 1970s-inspired the Hoxton Rome. The hotel’s richly detailed, individual design will feature marble-clad walls, vibrant terrazzo floors, while a bright lobby will be home to a fireplace and seating overlooking the open kitchen. The hotel’s 192 guestrooms and suites will be outfitted with rustic parquet floors in tandem with locally sourced stonework and lacquered timber honoring the bold palette of midcentury Italian design. The walls of the accommodations will be adorned with geometric timber panels and bespoke brass light fixtures. 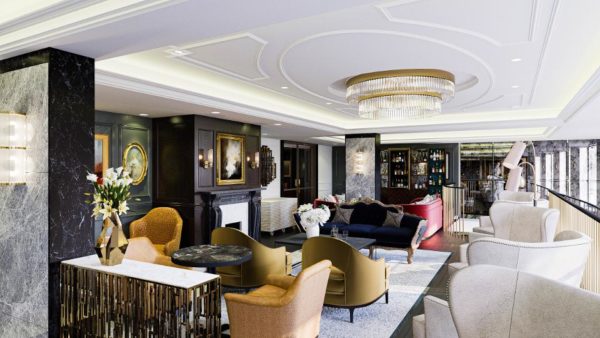 If you are looking to explore somewhere new and exciting, look no further than the capital city which is gearing up to welcome three new hotels early next year.

The Guardsman, on Buckingham Gate, is one of  the most highly-anticipated openings for 2020. The luxury boutique hotel aims to offer a ‘home from home’ experience much like that which you’d expect at a private members’ club. From choosing what bathroom products you have in your room to the curated art collection, it’s all about offering a bespoke, personalised approach for guests.

The 53 individually-styled bedrooms have a traditional British design ethos with custom-made furniture, free-standing baths and herringbone parquet flooring. Interiors are contemporary and relaxed, with a mix of classic and quirky embellishments.

On the top-three floors – and tapping into the ‘hotel residence’ trend that is currently gaining momentum in luxury hospitality – there are six apartment-style rooms, designed as the ultimate London pied-a-terres. Bedrooms, living spaces, dining areas and fitted kitchens offer a bijou, self-contained stay.

Opening in January, meanwhile, is Ruby Lucy from Munich-based hotel brand Ruby Hotels. The first opening for the group outside of Germany and Austria, the new hotel on the Southbank will have a selection of room sizes, from the cosy ‘Nest’ to the expansive ‘Loft’ rooms. It will showcase the brand’s sleep-scientist-approved formula for the perfect night’s sleep, with full soundproofing, blackout curtains, high-quality linen and extra-long and wide custom mattresses.

A contemporary ‘carnival-theme’ design will see quirky touches such as the inclusion of a Marshall guitar amp in each room, which guests can use both with their own guitar or one borrowed from reception. Rich, dark tones will meet bright brass accents and subtle stripes will be accented with playful props including circus drums and juggling pins.

As well as the ‘Ruby Radio’, the hotel group’s own internet radio station, there will be cutting-edge technology on offer throughout the property. In-room tablets are pre-loaded with Ruby Hotels’ curated London city guide and a state-of-the-art self-check-in system aims to heighten guests’ experiences. A stylish bar and dining area, a communal work station and a library add to the contemporary feel. What’s more, Ruby Lucy will follow Ruby Hotels’ ‘Lean Luxury’ philosophy: a top location, high-quality fittings, and outstanding design with affordable prices.

Found on City Road, on the fringes of Shoreditch, and also opening next month, is NH Hotel Group’s first hotel in the UK. The design and lifestyle brand currently has hotels in Berlin, Rotterdam, Milan and Marseille, and its new opening – nhow London aims to capture the spirit of this creative quarter of the city.

Known for offering ‘unconventional experiences’, unique to each hotel’s location, the hotel plays homage to both the area’s industrial past and technological future.

London-based Project Orange has overseen the interior design, taking on the theme ‘London Reloaded’. Guests can expect bold design inspiration from traditional British icons, such as the Royal Family, London landmarks and the underground. Features include a Big Ben rocket sculpture in the lobby, tables featuring cockney rhyming slang and oversized gold bell lights, to give a nod to the city’s famous church bells.

The eight-storey hotel will have contemporary art in the bedrooms, a restaurant conceptualised as a reinvention of the British pub, vibrant decor and a fun approach to hospitality. 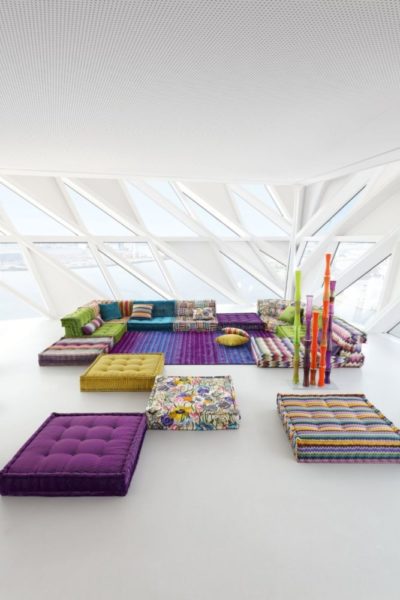 The right mix of spatial planning and clever design details can truly transform a space, as design principals Jennifer Murray and Divya Anthony would know. The dynamic duo helm The I.D. Dept (IDD), a local design firm that specialises in crafting luxury abodes for well-travelled homeowners in Singapore and beyond.

“In our industry, we can ‘walk into our dreams’,” quips Murray, discussing the thrilling magic of interior design. “It’s always been about our imagination and putting it into context of the space you’re designing for,” adds Anthony.

(Related: The Design Directors Behind Singapore’s Most Glamorous Homes)

Watch the video below to see how these digital tools will help bring your dream living room to life.

Helmed by Jennifer Murray and Divya Anthony, the homegrown design firm pairs a bespoke approach to interior design with clever spatial planning and an astute understanding of the unique needs of luxury homeowners.

The designers are well familiar with French brand Roche Bobois; most notably the iconic Mah Jong Sofa, which they have selected for a vibrant penthouse in Singapore. They revisited the Roche Bobois Singapore showroom recently to try out the Mah Jong Sofa 3D App, as well as the other 3D and VR (virtual reality) tools that allows designers and homeowners alike to arrange and customise the modular sofa system in their preferred colours and patterns. 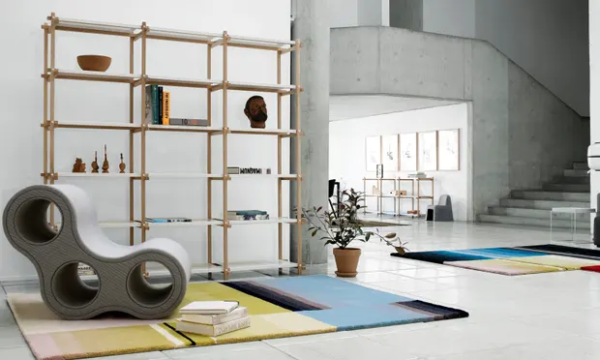 There’s something magical about taking a few entirely two-dimensional panels out of a box and a few huffs and puffs, a scream and an air punch later, presenting to yourself a fully functional three-dimensional object. Pure magic.

Flatpack furniture has accrued a reputation associated with poor quality and lack of style over the years. As it grows more ubiquitous, some have suggested that the flatpack phenomenon is in danger of becoming dominated by functionless trends. In fact, quite the opposite is true. The ultimate space-saving, cost-effective and highly customisable furniture form still has a place in our homes. Here are the why’s and how’s.

Granted, this one is subjective. But if you consider carefully the style of most flatpack furniture and pinewood colours that could almost make a large coffee table invisible; it shares some characteristics with its style-cousin, minimalism.

The flatpack phenomena has expanded beyond the Scandi design of Ikea. Find a new generation of creating stylishly chic self-assembly pieces on the market. Hay has been attracting a new wave of style-conscious customers since 2002.

Its aesthetic is rooted in Danish design, with clean lines and organised form. However, they do experiment with new material and technology, all which maintaining a certain level of chic. Their woody column shelving unit screams (quietly) tasteful and practical.

French designers Ronan and Erwan Bouroullec have upped the luxury buy creating a flatpack sofa and an armchair that can be completely constructed by you at home.

Residents of small apartments with smaller than average doors will probably see the immediate benefits of sliding a bod of components through the door. Those who have less time than they’d like might have to pass up on the extravagant shipment of wardrobes from abroad to be delivered and built by professionals in their home.

Hem has worked to enhance the convenience of self-made furniture by creating a number of ready-to-assemble designs. Their Key Tripod side table is an elegant addition to any room and according to Hem, can be assembled in less than 30 seconds. No tools are needed and the accompanying key locks the fixtures into place.

In many cases, the final product of constructing DIY flatpack furniture is extremely simple, monocoloured and bland. But that’s not a reason to steer away from it. Use this as your canvas and get creative.

Create beautiful bespoke interiors with upholstery, paint and embroidery. There are effectively no limits on what you can do with a simple Ikea bedside table that took you a few minutes to erect.

If you’re having trouble thinking up some funky designs for your interiors, allow Tylko to help. The simple mobile app allows users to both design and visualise furniture u their home, then order it. Design furniture on the app by changing the configuration and shape of products using the apps simple interface. Augmented reality effectively lets users test the product using the phone’s camera.

Once the furniture has been designed, fitted and approved by the customer, Tylko auto-generated a production program for the factory machines. When the product is created, Tylko will also generate a custom assembly manual for the one-off piece of flatpack furniture.

Like all things in life, there’s a broad range of prices you can expect to pay for a flatpack chest of drawers, for example. Use this to your design-advantage by opting for cheaper pieces of furniture when it comes to bedside tables, shelves and chest of drawers.

This should give you a little more spending money for things that you shouldn’t scrimp and save on. Save a few pounds on cheaper items of flatpack furniture so you can spend a little extra on things like sofa’s, artwork and lighting.

Little needs to be said of the value for money in most instances of purchasing flatpack furniture. When you opt for the cheaper version, you’ll often find that quality isn’t necessarily reflective of the price. Rather, you pay less for a relatively solid and functional piece- making it hard to see where you could go wrong when saving money with flatpack.